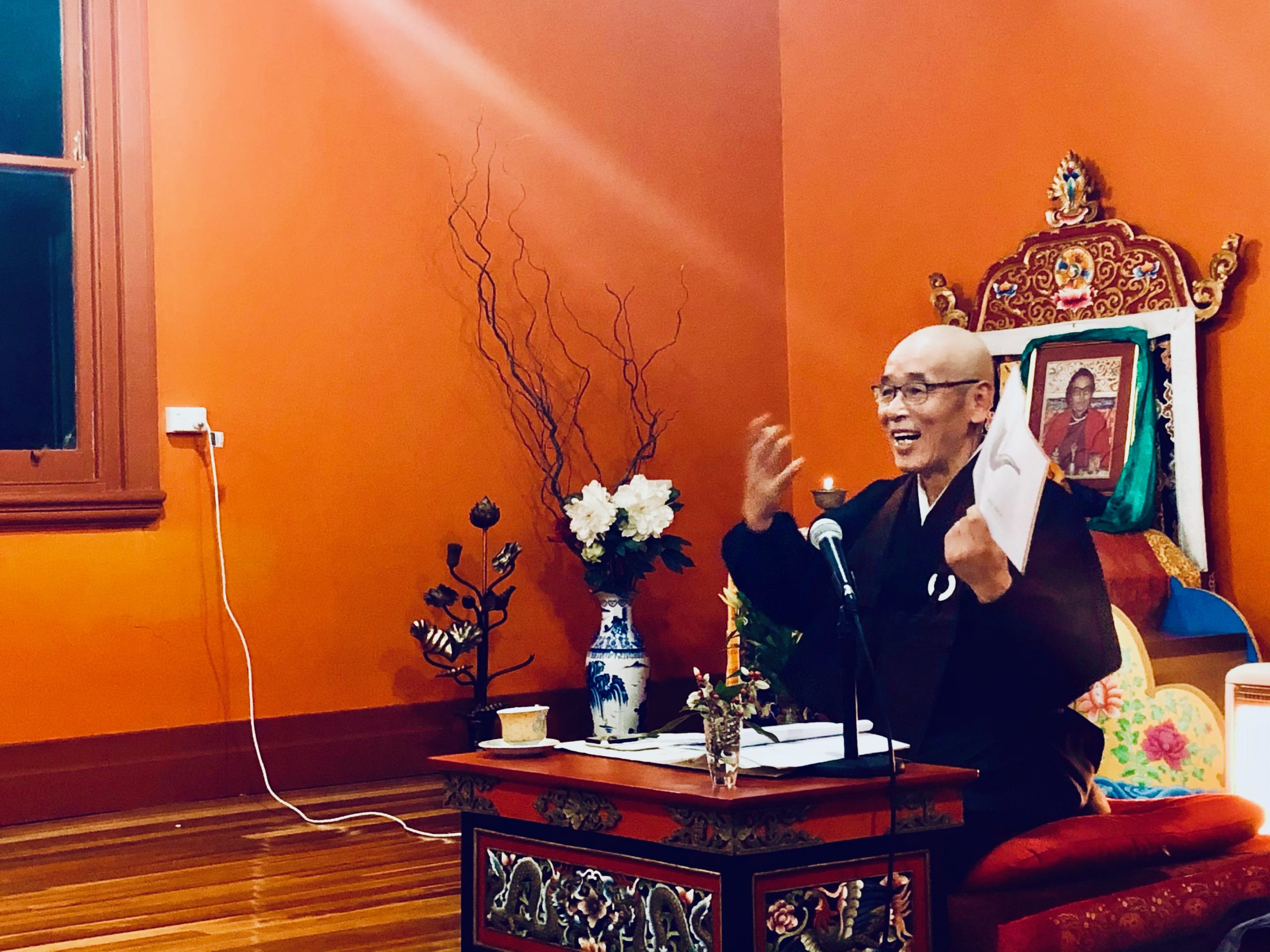 THE SONG OF THE PRECIOUS MIRROR SAMĀDHI

E-Vam Institute is very proud to present Ekai Korematsu Roshi. Continuing the annual tradition as requested by Traleg Kyabgon Rinpoche IX, Ekai Roshi will teach on the The Song Of The Precious Mirror Samādhi (Hokyo Zanmai-Ka) by the Zen Master Tozan Ryokai. This profound poem maps out five stages of comprehension of the relationship between the absolute and relative realities.

Anyone with an interested in Buddhism or meditation are welcome to join our Winter Zen class series with the wonderful Ekai Korematsu Roshi.

Although it is not constructed, it is not beyond words.

Like facing a precious mirror;
form and reflection behold each other.

You are not it,
but in truth it is you.

Like a newborn child,
It is fully endowed with five aspects….

-The Song Of The Precious Mirror Samādhi (Hokyo Zanmai-Ka) by the Zen Master Tozan Ryokai.

Master Tozan’s teaching is well represented and characterized by use of the following methods:

Dongshan was distinguished by his ability to instruct all three categories of students, which he defined as

A large portion of Master Dongshan’s fame came from his having attributed to him the Verses of the Five Ranks. The Five Ranks were a doctrine which mapped out five stages of comprehension of the relationship between the absolute and relative realities.

The Five Ranks are:

Since his early life, Master Dongshan had utilized gātha, or small poems, to better understand and to expound the meaning of Chan principles for himself and others.

The poem Hokyo Zanmai by Chan Master Tozan Ryokai will be presented. This text clearly reflects the origin of Buddha Dharma and fundamental Teaching of Soto Buddhism.

Anybody interested in Buddhism and meditation is welcome to Join Winter Zen Class and discussion (4 sessions).

Ekai Korematsu Roshi is the main teacher and Director of Jikishoan’s “Zen and Integrated Buddhist Studies” Program. Born in Japan in 1948, he studied humanities and Buddhism in Denmark, USA and Japan. He was ordained as a monk by Kobun Chino Roshi at Haiku Zendo, Los ALtos in 1976. He received dhamma transmission from Ikko Narasaki Roshi at Zuioji Monastery in 1986. His formal training was twelve years in three monasteries; Eiheiji, Zuioji and Shogoji. His Buddhist education is through Soto Zen Buddhism. Ekai Roshi has been serving as Abbot and Resident Teacher of Jikishoan Zen Buddhist Community in Melbourne since its inception in 1999.

Please join us in this opportunity to practice and learn together. Register to join below. Attend the full event for $72. Single sessions $20.

Dana: If you would like to give or apply for financial support for this course: (https://evaminstitute.org/dana/)