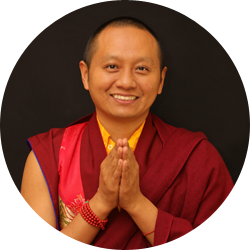 The six paramitas, or transcendent perfections, are an essential concept in the practice of Mahayana Buddhism. They are so fundamental in fact that the “Vehicle of the Perfections” is a synonym for Mahayana itself.

Traleg Rinpoche in his Essence of Buddhism, includes two chapters on the paramitas and introduces them: “If we want to obtain enlightenment by becoming a Bodhisattva, it is necessary to actualize wisdom and compassion. This is done by the practice of what are called the six paramitas, or ‘transcendental actions.’

Para in Sanskrit literally means the ‘other shore.’ Here it means going beyond our own notion of the self. From the Buddhist point of view in general, and from the Mahayana point of view in particular, if we want to progress properly on the path, we need to go beyond our conventional understanding of the self. So when we say that paramita means ‘transcendental action,’ we mean it in the sense that actions or attitudes are performed in a non-egocentric manner. ‘Transcendental’ does not refer to some external reality, but rather to the way in which we conduct our lives and perceive the world—either in an egocentric or a non-egocentric way. The six paramitas are concerned with the effort to step out of the egocentric mentality.”

Khenpo Chonyi Rangdrol became a monk at Thrangu Monastery Nepal at the age of six and in 1998 became the youngest Khenpo in the Monastery’s history.

**The term khenpo (Tib. མཁན་པོ། mkhen po), or khenmo (in the feminine) is a degree for higher Buddhist studies given in Tibetan Buddhism. In the Nyingma, Kagyu, and Sakya traditions, the title is awarded usually after a period of 13 years of intensive study after secondary school. It may roughly translate to either a bachelor’s degree, or nowadays more likely to a terminal degree in Buddhist Studies equivalent to a PhD or MPhil. The degree is awarded to students who can publicly defend their erudition and mastery in at least five subjects of Indo-Tibetan Buddhism, namely Prajñāpāramitā, Madhyamaka, Pramāṇa, Abhidharma, and Vinaya. After successfully passing their examination they are entitled to serve as teachers of Buddhism. ~ https://en.wikipedia.org/wiki/Khenpo