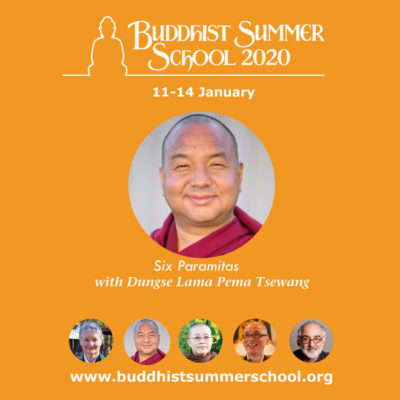 The six paramitas, or transcendent perfections, are an essential concept in the practice of Mahayana Buddhism. They are translated as generosity, discipline, patience, diligence, meditative concentration, and wisdom. From the Buddhist point of view in general, and from the Mahayana point of view in particular, in order to progress properly on the path, we need to go beyond our conventional understanding of the self. Para in Sanskrit literally means the ‘other shore’ and here it means going beyond our own notion of the self, in the sense that actions or attitudes are performed in a non-egocentric manner.

Dungse Lama Pema Tsewang was born in 1972 in Tsum, in the Himalayan border region of Nepal. At the age of nine he entered Thrangu Tashi Choling Monastery in Boudhanath, Kathmandu, taking the novice vows of a monk in 1983 and the full ordination vows of a gelong in 1989. He completed a traditional three-year retreat under the guidance of Ven. Thrangu Rinpoche then returned to Tsum and received all the empowerments for his family lineage of Guru Chowang. After completing his studies in Buddhist philosophy and ritual in 1997, he became the principal of Shri Mangal Dvip School, Rinpoche’s school for Himalayan children in Kathmandu, Nepal.